Glenn R. Osborn, the first police chief in Twinsburg, is reported to have said: “It has always been my firm conviction that there is no more certain barrier to crime than efficient local policing supported by an enlightened, cooperative citizenry. Community respect and assistance are so vital to the success of law enforcement [and] are achieved only through unified police and public effort.” One need look no further than the three communities to find the truth in this statement.

Prior to splitting into three separate entities, the three communities were policed by the Twinsburg Township constables. Twinsburg in the early years of policing has been compared to Andy Griffith’s Mayberry. It was a rural farm town where almost everyone knew everyone else and crime was a rarity. 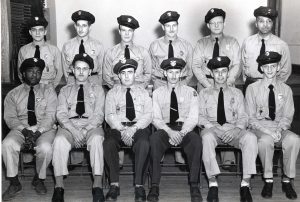 Twinsburg Constable force in the early 1950s before the Village and Township split.

When the City of Twinsburg split from the Township and started its own police department on March 4, 1955, Glenn R. Osborn was named police chief for the newly formed Twinsburg Police Department. Osborn and patrolman Otto Clarvat were the first two full-time officers for the Twinsburg PD. In the beginning, Osborn’s wife was in charge of all dispatches for the PD and volunteer fire department. She did this from the Osborns’ house with the use of five telephones.

Osborn was progressive in his approach to policing. Current police chief Chris Noga, who also acts as unofficial Twinsburg PD historian, has commented, “He embraced the concept of the police radio and brought those in. He was one of the first users of the police computer, that system where we can query and find out information on license plates, and driver’s licenses . . . does this person have a warrant out for their arrest.” He also served as the president of the Ohio Association of Chiefs of Police. Possibly his most important contribution was lobbying for the pension system for police officers and firefighters that now greatly benefits those who serve. 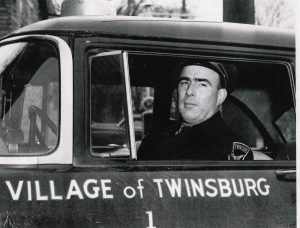 Reminderville also would form its own police department, but until recently it lacked many of the advantages afforded the Twinsburg PD. When current Reminderville mayor Sam Alonso first took office, he recalls, village police officers were making well under ten dollars an hour. A number of the officers were enrolled in the WIC (Women, Infants, and Children) program to feed their families. The police station was a small backroom at City Hall, barely sufficient as an office for one more person, much less a police station.

Presently police officers are making over twenty dollars an hour due to the efforts of Mayor Alonso. A new police station was funded by money procured from a major drug bust. The new station is located less than half a mile away from City Hall on Glenwood Boulevard.

During a meeting on September 12, 1983, the Board of Trustees decided Twinsburg Township would start its own police department. Previously there had been talks with Reminderville about forming a joint police force, but no agreement could be reached. The Township police department officially came into being a mere nineteen days later, on October 1. Prior to the formation of the police force, the Township contracted with Reminderville for all its law enforcement needs.

Four officers, including the chief, comprised the entire department when formed in 1983. Additionally, two patrol cars (purchased at a cost of $5,200 each) were procured, as well as equipment including radios, cameras, and an assortment of other necessities.

In spite of these investments, the department did not last long. In January 1988 the trustees voted to disband it due to a slew of indiscretions combined with financial woes. Corruption was corroding the unit to the core, commencing at the top with Chief Samuel Williams. The discredited chief, who had resigned the previous year for “health reasons,” was charged on one count of theft and tampering with records, as was Sergeant. Demetrius MacKannon. The allegations mainly revolved around the chief and sergeant “double-dipping” by working on security jobs while still on the clock for the police department.

Just as instrumental in the downfall of the department were the financial difficulties the Township was dealing with. Paying the sheriff’s department for five full-time deputies to patrol the area saved the Township almost $150,000 in the first year ($237,000 as opposed to the $377,000 it cost to run the police department).

Most recently (in 2014) the Township entered into a three-year agreement with the Summit County sheriff for police protection services. The Township pays for these protective services via property taxes, intergovernmental revenues, and “General Fund transfers.” 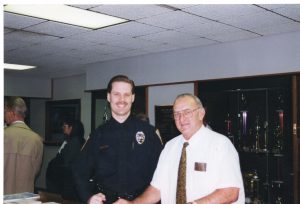