Possibly the most unique sports story in the annals of Twinsburg history involved one of the more successful athletes to ever reside in the region, Jim Mathis. Amazingly, his many athletic achievements occurred after injuring his spine, leaving him paralyzed from the waist down, at the age of 16. His rehabilitation took almost three years, but it wasn’t too long before he started the Cleveland Comets, who became a member of the National Wheelchair Basketball Association.  With that he found himself competing against teams from New York City to St. Louis, but basketball was not to be his most successful sport.

He was in New York City in 1957 when the first Wheelchair Track and Field Games were held in the United States, and decided as somewhat of a lark that he might as well compete in some of the events. Incredibly he won an archery competition, repeating his victory in 1958 and 1959.  And while he finished second in 1960 it qualified him for the 1960 Wheelchair Games held in Rome.  It was the first time the Wheelchair Games were held following the Summer Olympics in the same city. Mathis won the silver medal in Archery at the Rome Olympics, and considers it the most exciting athletic achievement in his career, according to an article he wrote for the Twinsburg Bulletin in 1972. 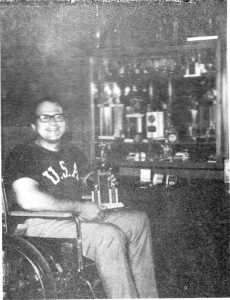 Noted Wheelchair Athlete in front of his Trophy Cabinet in 1972.

During the 1964 games in Tokyo, Mathias won both a gold and silver medal in the archery competition.  Mathis, who was living in Twinsburg at the time, finished 3rd in the 1972 National Competition and qualified for the U.S. Wheelchair Olympic Team for a 3rd time.  Mathis, who at the time was also giving archery exhibitions in Twinsburg, had the region clearly in his corner when he left for the Olympics. He found himself on the front page of the Bulletin a few times that summer.

Mathis traveled to Heidelberg, Germany to compete in the Wheelchair Olympics, which occurred few weeks before the 1972 Summer Olympics in Munich.  For the first time he didn’t medal. It was his last Olympics, although by that time he had won three Olympics Medals as well as being a national archery champion four times, having competed in all 16 competitions up to that point.