AFS-USA has been the leading, nonprofit organization in intercultural learning and  international exchange programs for over 70 years. As of the early 1960s though, when the program was barely 20 years old,  Twinsburg had never been one of the communities to participate in the program. This changed on August 14, 1963  when Inger Marie Halverson arrived from Torga, Norway and stole the collective hearts of the region.  Her year in Twinsburg was spent at the home of her hosts, the Don Gilbert family. 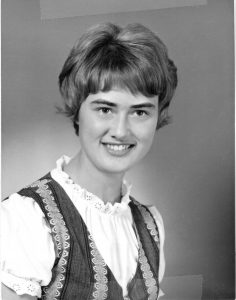 Inger Marie fever quickly spread across the community. Mayor Richard Lippet proclaimed her day of arrival as “Inger Marie Day”, and gave her a key to the city during a ceremony at the Village Hall. Open houses were held at the high school for the region to meet her. There was a the showing of a Norwegian film, a rare occurrence in a small Midwestern village in the 1960s. Inger Marie’s mother sent Norwegian holiday cookies and holiday decorations for all to enjoy, and Twinsburg celebrated Norwegian holidays so Inger Marie wouldn’t feel homesick. She was voted sweetheart of her class at the sweethearts dance in February of 1964, but as soon as the fervor had started it was over. At least to some extent.

During the following years letters from and news about Inger was often found in the Bulletin, including her graduation in 1966 and marriage to Bjorn Bakken in June of 1971.  As the years went by though they became more and more sporadic, ending in the mid 1970s.

The Gilbert’s eventually lost touch with her, but for a time in the early 1960s Inger Marie Halverson was the most popular girl in Twinsburg.