The Twinsburg Village Police Department responded to a report of a disturbance at 9842 Chamberlin Road, about ten miles north of Akron, at 2:30 a.m. on Sunday, June 18, 1967. When the police arrived at the abandoned picnic spot they were greeted with flying bottles, rocks, and screams of “Here come the cops” from the members of numerous motorcycle gangs partaking in a raucous party. Members of the Sundowners, Roaring Twenties, Grim Reapers, Red Raiders, and Misfits were among the culprits, many of whom sported long hair, black leather jackets, earrings, swastikas, and German-type helmets. 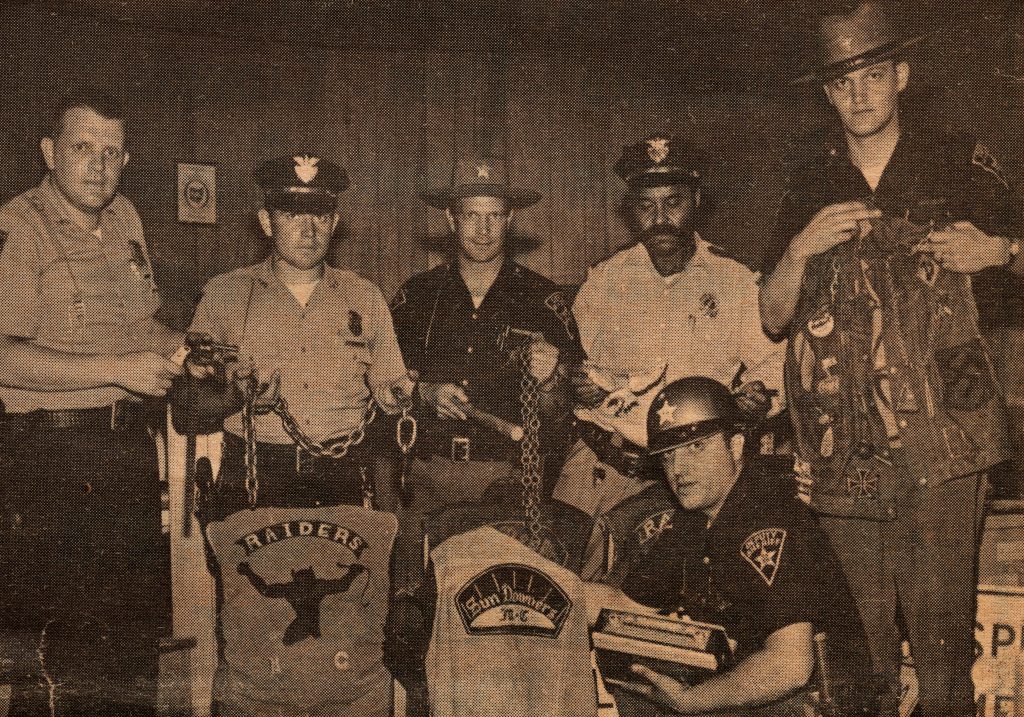 Guns, liquior, insgnia, and other apparel reside in the custody of Twinsburg Police following the arrest of dozens of gang members.

Police reinforcements arrived from Portage and Summit counties, including officers from Hudson Township, Twinsburg Township, Bedford, Macedonia, Solon, Stow, and Tallmadge. Many of the officers were equipped with riot guns, but luckily, and surprisingly, when the reinforcements arrived the bikers decided to leave quietly. According to Police Chief Glenn Osborn, evidence confiscated included a .22 caliber pistol, a large assortment of knives, chains, blackjacks, and a swastika flag. Thirty-nine adults and five juveniles were arrested, with the adult perpetrators being taken to Summit County Jail, while the youngsters were turned over to the county’s detention center. Many of the officers on the scene expressed shock and dismay to find that a number of the bikers (including nine of the incarcerated) were female.