An advertisement of sorts occupies the north-facing side of the old red barn sitting along Darrow Road just south of the town square: chew mail pouch tobacco; treat yourself to the best. The three-story barn next to the Twinsburg Historical Society has stood on that lot since 1870, when it was built for Dr. Seth Freeman, as a home for the horses and wagon he used when making house calls. 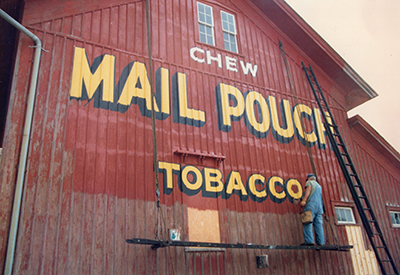 The old Freeman barn adjacent to the Twinsburg Historical Society receives a fresh coat of paint.

The sign, a nostalgic reminder of a bygone era, was painted in the fall of 1987 by Harley Warrick. According to Marge Percy, one-time president of the Twinsburg Historical society:

“Here is how the project began. At the meeting of the society, I shared a column by Frances Murphy of [the] Akron Beacon [Journal], where she described Mr. Warrick and his work and how to reach him. I received a unanimous OK to proceed with the project. I called Mr. Warrick, who lived in West Virginia. He agreed to the project, but before he presented the idea to his boss, the society had to fulfill a list of criteria which was…

1. Written consent for such a project had to be given by the mayor and council of the town and township.

2. The sign had to be visible from a major highway.

3. The sign had to be a reasonable distance from any bar or liquor store.

Though he was never a household name, Mr. Warrick’s artistry and advertisements have been seen by countless drivers and passengers along America’s highways and byways. Twinsburg’s very own mural was a labor of love that took the better part of twelve hours to complete. The craft honed by Warrick and the career he was devoted to spanned more than fifty years and more than twenty thousand barns. His initials, a humble “H.W.,” are painted at the lower left corner of the mural.