Leo Wagner was the owner of the Tip Top, a little restaurant once nestled between Richner Hardware and Roseberry’s. Mildred Karabec began working for Wagner in her teens, when she was still too young to work out front, and was later being promoted to waitress. “There was a restaurant up there . . . it was called The Tip Top,” she recalled. “It was one of the nicer restaurants in Twinsburg for a few years . . . good food . . . Steak, chicken, anything, pork chops, or sandwiches on lunch.” 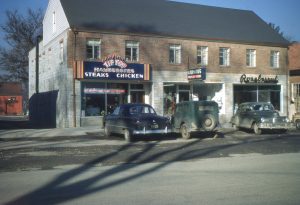 Some of Twinsburg favorite stores in the 1950s.