There is a another community (besides the Township, city, and village) with a rich if too often unspoken history: Twinsburg Heights. It is often referred to as simply “the hill” by its residents due to it being situated atop a hill. Though officially part of the Township it has always been something of an entity onto its own. It has since its inception been unincorporated. The small development spans all of seven streets, all of which are named after venerable universities—Oxford, Yale, etc. It lies all along and to the west of Hadden Road (previously know as Richner Road) between Darrow and Highland roads. An unusually close-knit and religious community, all the residents were familiar with one another and there was a church nestled on every street.

Land developer Charles H. Brady of Ravenna Building Co. created the master plan for the community. He bought the land and had it surveyed into forty-foot lots. In the 1920s families started moving into the new development. All the lots were sold to African-Americans, the reason for this is not known. The houses that were built were small, often with no basement and in outhouse out back. Driveways were dirt or gravel. It resembled African-American neighborhoods and communities in the deep south. Much like the deep south it was very rural and a number of residents raised pigs or chickens. Carlton Powers, current and long-time Deacon of Mt. Olive Baptist Church said, “I never was in Mississippi, but they tell me it was like they took a part of Mississippi and brought it up in Ohio and planted it there.”

There has always been a sense of family among the residents. Tania Johnson, Fiscal Officer for the Township and life-long resident of the Heights recalled, “even if you weren’t related…you felt like you were related.” Block parties, numerous church and social clubs, and the beloved community center were factors adding to the closeness felt by the residents.

Brady promised a church site to the first pastor to move to the Heights. This was eventually awarded to Reverend John W. Ribbins, who moved from to Cleveland to the Heights. The site for the new church was 2089 Oxford Street at the corners of Oxford and Yale.

The first church meetings in the Heights “ were held in a room rented from Emman Mckinney, and a little later the home of Lewis McDonald served as a meeting place,” according to a History of Twinsburg. May 25, 1932 is the date the church was officially organized with Rev. J. B. Wilder serving as Chairman and Christine Golden acting as secretary. They moved from parishioners homes to  Church of God in Christ, located on Eaton St. in 1933. In late 1934 the congregation moved again, this time to the new church built on Oxford Street, with Rev. Ribbins serving as the first pastor. At this time the church was named Mt. Olive Baptist Church, still active today and the longest running church in the Heights. It was the first of many churches in the community. Some of the other houses of worship that were founded in the Heights included the African Episcopal Methodist Church,  the Sanctuary of Praise, Seventh Day Adventist, Apostolic Church of Christ, and other non-denominational churches. 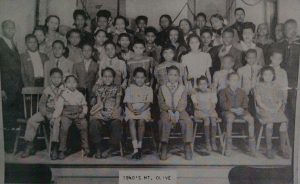 Though the Heights has been considered a great place to reside by nearly all current and former residents, it has seen its share of injustice. Residents of the Heights have often been the beneficiaries of racism and discrimination. The Heights was never able to establish equality with or independence from the Township or the City.  If the Heights had been incorporated into a village  in the 1960s as was attempted, greatly needed improvements and renovations the community greatly need would have occurred much sooner. Incorporation was always blocked by Township Trustees.

In the mid-80s The Plain Dealer ran an article citing numerous instances of African-American residents of the Heights being the victims of the discrimination. Incidents ranged from school bus drivers refusing to pick up or drop off students in the Heights to police profiling. There was also a rash of fires set to houses and other properties in the Heights.

One of the greatest injustices dealt to the residents of the Heights was the lack of running water and even electricity in many homes. Running water, a given for most Americans by the middle of the Twentieth Century, yet wasn’t commonplace in the Heights until the 1980s. Gas and water lines “came down Hadden, went up Cambridge all the way to Chrysler…but we were not allowed to tap in,” according to Carol Tate. Besides the water line originating in Akron that pumped water to the Chrysler Plant there was also a water line from Cleveland to the village of Twinsburg. Though both lines passed through the Heights, residents of the impoverished community were not allowed to tap into either.

Well into the latter decades of the twentieth century, paved roads were an unknown commodity. “Sometimes the roads were so bad that the bus couldn’t go any further than Hadden Road, so we had to walk from our home to Hadden Road, at least a 10-12 minute walk when conditions are favorable. Sometimes the mud would be over our shoes,” said Ms. Tate. Street lights were uncommon as well. Starting in 1980s a revitalization program happened in the Heights. Finally running water, electricity, sidewalks and paved roads became the norm. Modern homes have been built. It was a long process and immensely overdue.

The Heights has been on the upswing for years, but the difficult times should not be forgotten. Filmmaker Carla Carter, along with a group of high school students, brought the story of Twinsburg Heights to the masses with the documentary, Voices on the Hill. The film has played at a number of film festivals across the country.