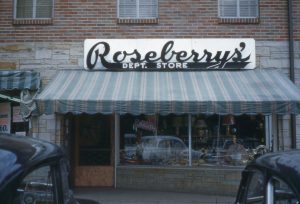 Nestled between the Twinsburg Banking Company and Lawson’s stood Twinsburg’s very own department store, Roseberry’s. The shops surrounding Public Square were owned by a veritable who’s who of area families. Staking a claim there made complete sense for the up-and-coming business. The store originated within the confines of an old Gulf

The store originated within the confines of an old Gulf gas station near the intersection of Routes 91 and 14 that Stan Jewell owned and operated. It was October 1945, and Stan had just made it home from serving his country. Seeing an opportunity to use his mechanical skills and provide for his family, he moved quickly to establish a sound and successful family-owned business. One of the ways in which he provided services to the community was having his father-in-law, Wilmer Roseberry, open a small store within the station. Stan Jewell referred to the section of the gas station that would become Roseberry’s as the “Notion Nook.” It was just one room, as he described it, consisting primarily of women’s goods, like blouses and underwear. “It was the only place in town [to get such things].”

And shop they did! Business was doing well and a storefront vacancy between too older, more established businesses proved too titillating to pass on. Roseberry would take the essence of the Notion Nook and expand it into what many area residents remember so fondly. During its years of operation the store was a bastion of convenience for those in need of items not typically available in Twinsburg at the time. “The main floor,” according to Mildred Karabec, “had a little bit of everything and anything anyone requested . . . all kinds of personal items and household items.” 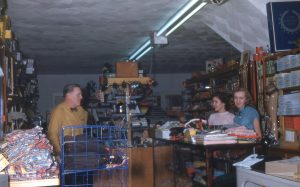 Mr. Roseberry was not only the owner of Twinsburg’s first department store, but the owner and publisher of the Twinsburg Bulletin.

The holiday season stood out for many as a particularly special time for shopping at Roseberry’s. Karabec worked there for two years, including one memorable holiday season. Asked to describe it, she spoke of how the basement was stocked with toys, but only accessible to children nearer the holidays. One of the notable things missing from the typical seasonal offerings of a larger department store was the jolly presence of St. Nick himself. According to Karabec, Roseberry’s was just too small to accommodate the girth and grandeur of a seasonal Santa.