Like a boulder that withstands the flow of a rushing river, the First Congregational of Twinsburg has remained unmoved, in spite of time and transformation. A house of worship, it has stood through the ages, a silent witness to generations of parishioners and the coming and going of reverends, as well as periodic renovation and expansion. 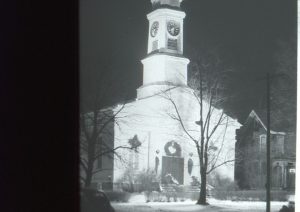 Twinsburg’s oldest church during a long ago Christmas season.

The origins and essence of the church predate its physical embodiment. The first assembly coalesced in August of 1822. Though small in number, the thirteen founding members formed a cohesive community, united in their belief in a higher power. The work and worship they dedicated themselves to began within the walls of a small log structure in close proximity to Public Square. The church standing today owes its construction and craftsmanship to the skilled laborers who completed the structure in the autumn of 1848.

Over its nearly two centuries of service, numerous leaders would guide the flock; schisms fractured the congregation and time brought them together again. The street it stood along, Church Street, was named for its houses of prayer, though Congregational Church would eventually stand alone, much as it was when it began its life. Of all the reverends to serve, Dewey Long held the distinction of serving the longest, doing so from 1972 to 1991. It was during his tenure that in 1974 the National Register of Historic Places bestowed a place within its ranks on the church, recognizing its longevity and importance to the community. Patricia Jefferis, the first woman to shepherd the flock, arrived in 1998.