During the Thanksgiving Blizzard of 1950, forty-mile-per-hour winds socked the region, and a blanket of snow more than one foot deep covered the land. Areas farther east fared worse, with some Ohioans recording more than two feet. The culprit was an extratropical cyclone that paralyzed the area unlike any storm during the prior three decades. Temperatures hung near zero, freezing water lines and killing car batteries. Nationally, 353 souls perished due to the storm. Many sources compare the storm’s ferocity to that of the 1913 storm that crippled the region for five days. Estimates place fatalities for that storm at over 250. In Cleveland, the Ohio National Guard provided support in light of the countless police officers unable to make it in to work. Many of those enjoying family and festivities over the Thanksgiving holiday were forced to extend their stay. 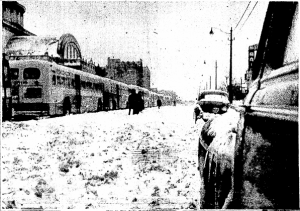