Mankind has experienced many strange things for which no parallel could be found. In 1972, author and UFO researcher J. Allen Hynek categorized and defined the many experiences people claimed to have had with aliens and unidentified flying objects. His book The UFO Experience: A Scientific Journey provides the following outline:

Disclaimer: not an actual photo of the purported UFO seen over Twinsburg in 1969.

On the evening of March 6, 1969, area residents both saw and experienced the effects of one such object. Eyewitness accounts seem to corroborate the presence of a UFO along a stretch of Liberty Drive.

Mildred Karabec lived off Liberty Road in 1969, along with her husband James Karabec. The strange activity began as they arrived home for the evening. “We had just moved in…I pulled in my driveway and I opened the garage door . . . and the door kept going up and down and up and down.” Their residence was located along a swath of high-voltage power towers that cut across the rural countryside. Former mayor James Karabec, suggested that alien aircraft “would get their power from the power lines,” as they flew parallel to those streams of electricity. What of the aircraft itself? What did it look like? Mildred Karabec recalled, “We saw lights but there was no noise over the power lines . . . there was absolutely no noise . . . bright, they were just bright lights . . . white.”

Sketch of a unidentified flying object from page 6 of a highly redacted United States Air Force report, from 1969.

Reports from residents terrified and confused by what they saw began making their way to the police on duty that night. According to Betty Tomko, two area officers investigated. Her account of their patrol is as follows: “We had two policemen call it in . . . and they were coming up Cannon Road Hill . . . and they actually stopped their cars on the hill and got out because something was hovering over top the police car and it was very bright lights around and they got out and watched this thing for a while and they felt it was watching them so they got back in the car, and when they would try to go forward this thing would follow them and I guess it followed them to the top of Cannon and when they turned on Liberty, it flew away.” Photographer Mark Gutowski remembers, “We were actually friends with one of the patrolmen at the time. Not sure which one it was . . . On that night, I remember him visiting our home and asking if we’d seen anything.”

An interview with police sergeant Donald Prange appeared in the Twinsburg Bulletin on February 24, 2015, adding credence to accounts by the many silent observers of that night several decades ago. Reporter Andrew Schunk wrote:

The evidence may have been in the evening sky over the city Feb. 17, 1969. The curious case of one local UFO sighting began innocuously enough in the city of 7,000 with TV interference at a Glenwood Drive home. It concluded, abruptly, with a bizarre visit to the Twinsburg Police Department from a United States Air Force lieutenant colonel and his mysterious, diminutive sidekick.

According to a recently released report from Project Blue Book, the United States Air Force’s systematic analysis of UFO reports between 1952 and 1969, a woman, 44, and her son, 19, were watching the news when the color contrast went out on their TV—and then the entire signal. The mother walked outside at dusk to check the antennae, and immediately called Twinsburg police to report an “oval-shaped object that had red and white lights around it”—what World War II pilots might have dubbed a “foo fighter,” or UFO, just two decades earlier. “Looking up we seen [sic] the strange object, coming over Glenwood Drive,” said the woman, whose identity is redacted in the March 6, 1969, report. “I never seen anything like this before,” she states. “It seemed to have stopped near the corner of [Glenwood Drive], then proceeded down [East Idlewood Drive] for about a quarter mile . . . then it just went right up out of sight.”

Sgt. Donald Prange, a former Twinsburg officer and Marine Corps veteran who later served as chief of police in Twinsburg in the late 1970s, responded to the woman’s call around 6:40 p.m. More than 20 calls referencing the UFO were ultimately fielded by Twinsburg dispatch that evening. Prange, now 77, recalled the event with detail Jan. 27 from his home in Rancho Cordova, Calif. “We officers talked amongst ourselves after the sighting,” said Prange, who said he witnessed the object over R.B. Chamberlin High School for several minutes with Twinsburg patrolmen Walter Orcutt and Herbert Munn. “I told them I didn’t think we should say anything to anyone . . . they would think we were crazy.”

In keeping with caution, the TPD did not immediately report the event to the USAF. The USAF was made aware of the event thanks to a Feb. 18, 1969, letter from the woman’s 19-year-old son to Wright-Patterson Air Force Base in Dayton detailing the sighting. In its April 22, 1969, conclusion to the Glenwood Drive woman, the USAF determined that the object was actually an “aerial advertizing [sic] aircraft.”

“A letter was sent to the Twinsburg Police Department requesting information on the sighting, however this office did not receive a reply . . . the description of the UFO is similar to past reports of Aerial Advertizing aircraft,” states Lt. Col. Hector Quintanilla, chief of the now defunct Aerial Phenomena Branch at Wright-Patterson. Prange said he doesn’t buy the USAF’s answer in the Twinsburg incident any more than he believes its conclusion from a Portage County case three years earlier, in 1966, when officers were informed that they had just chased the planet Venus for 85 miles, from Ravenna to just outside of Pittsburgh.

“It was like nothing I’ve ever seen,” Prange said. “We had three cars respond, and watched it for several minutes over R.B. Chamberlin High School, near some power lines there. “It appeared to be stationary, hovering. What bothered me is that it didn’t seem to be making any noise, at least not that ‘egg beater’ sound you get from a helicopter. It was more like a whirring sound. Then it slowly rose up and disappeared.”

For the woman and her son, the story ends with the April 1969 correspondence from Quintanilla. For Prange and his fellow officers, the story of the peculiar foo fighter over Twinsburg has one final, bizarre chapter. About a month after the sighting, Prange says his department was visited by a USAF lieutenant colonel—believed to be Quintanilla—and a “strange little man.”

“They brought out a light colonel . . . another strange little man was with him . . . to question us individually,” Prange said. “The smaller man, perhaps 5 feet tall, was not like us . . . he had strange features, almost like a child who has aged rapidly. He wore a hat, gloves, and he never spoke to us, never shook our hands, just observed. I don’t remember [the colonel] ever even saying thank you. When they left, we never heard from the Air Force again.” Prange added he never experienced anything like the February 1969 call again in his law enforcement career. “You ask me what it was? It was a flying saucer,” he said.

Fast-forward to 2014, and glowing spacecraft were still lighting up the skies over Twinsburg. Mildred Karabec recalled, “We were changing a tire for my younger sister and just happened to look up and we saw two of them interacting . . . and it had flashing lights.” They proceeded to head toward Liberty Park, the site of the close encounter thirty-five years earlier. “I got out of the car and stood by the hood of the car and two cigar-shaped [objects] . . . came toward us and stopped right above us and I turned to jump back in the car at that point and when I did, they went up a little higher and one went left and one went right. And then in a second they both met back in the center and headed straight toward Aurora and disappeared, but they moved at such speed.” 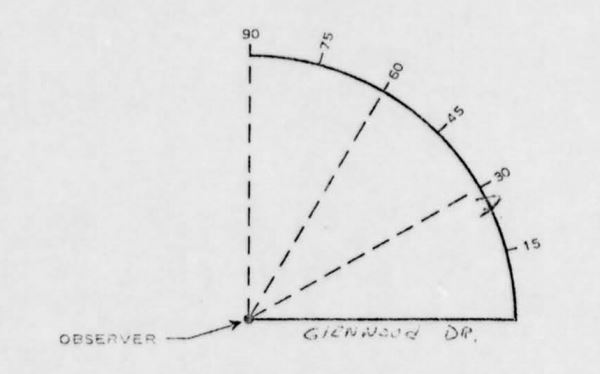 The pencil mark below the “30” indicates the angle above the horizon of the alleged UFO as seen by an unnamed observer along Glenwood Drive.

If flying saucers and glowing lights weren’t enough, there were rumors of an abduction. According to Betty Tomko, “There are a set of apartments at the top of Route 91 . . . [where] a child claims to have been abducted.” She said, “He was spending a night with a friend . . . The people who owned that apartment disappeared.” Local police were purported to be going door to door following the incident. When asked if they believed it to be a UFO, Betty Tomko replied, “I can’t attribute it to anything else.”