Like so many family-oriented, close-knit communities, the three communities are proudly patriotic. Twinsburg is the perfect locale for hosting an event honoring our veterans and safety services. In September 2012, a postcard was delivered to the Twinsburg Historical Society from a company in Texas promoting the traveling Vietnam Memorial Wall. The letter was passed along to Commander Joe Jasany, who immediately broached the idea of bringing the tribute to his fellow members of the 4929. In December of 2012, the Texas company provided information, including the cost of the exhibit, to Commander Joe. The cost for bringing the wall to Twinsburg was $16,000, an amount Post 4929 wasn’t even close to possessing, so Jasany went before City Council to ask for funding. The Council agreed without a second of hesitation to donate $5,000. In quick succession the Township and Reminderville gave $6,000 and $5,000, respectively, effectively paying for the wall.

There was still a great deal of funding needed for security, construction of a replica Vietnamese village, and a variety of other expenses. The Cost of Freedom Fundraising Committee held approximately fifteen fundraising events to raise funds for the event. In fact, so much money was raised ($88,000 overall) that a surplus was accrued and given to veterans in need.

From July 1 to July 5, 2015, Twinsburg’s VFW Post 4929 presented the Cost of Freedom Tribute event. According to the City of Twinsburg website, “The Cost of Freedom Tribute is a one of a kind outdoor tribute depicting honor, respect and remembrance of those who have given the ultimate sacrifice in defense of our country. The mission of the traveling tribute is to create a forum for communities to come together for all those who have given the ultimate sacrifice for their country and to educate all to the cost of freedom. The AVTT, or American Veterans Traveling Tribute, travels the USA bringing this traveling tribute to as many communities as possible.” The event featured much more than just the tribute wall. There were exhibits from every era, including a 9/11 exhibit built entirely by a retired firefighter from Macedonia.

Somewhere in the vicinity of sixteen to twenty thousand patrons visited the wall during the holiday weekend it was displayed in Twinsburg. It was open twenty-four hours a day with clergy stationed in a comfort tent the entire duration of the event. The majority of veterans visited the tribute in the cover of the darkest and most desolate hours of the evening and morning. The experience was too emotional and personal for them to share with the public. A couple of videos were produced to commemorate the event, one produced by Cable 9, the other created by a local high school student. 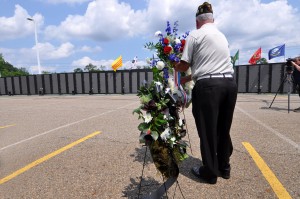 From July 10th to 13th, 1963 Twinsburg held their annual Homecoming Festival.  The event welcomed everyone to Twinsburg: “The Community with a Forward Look”.

The 52 page program was full of recognizable names including Mercer, Roseberry, Herrick, Bishop, McGhee, Chamberlin, Karabec, Bissell, Kollman, Richner, Percy, and others as well as area businesses and  locations.

In the early summer of 1947 everyone in Twinsburg had marbles on their mind, especially marbles as played by Twinsburg resident Johnny Florek,

Sponsored by VFW 4929, Florek finished second to David Glenny of Cuyahoga Falls at the District Marble Shooting Tournament held on June 14 .  However, a second place finish entitled Florek a spot in the State Tournament where he again faced his rival Glenny. This time though, Florek prevailed in what was described as even a closer match than their initial clash by local media.

The State Tournament, held in Glenny’s own Cuyahoga Falls, included a parade through the town. The highlights of the procession were two motorcycle policeman with sirens, a white police cruiser driven by their Police Chief, various State VFW Officials, as well as the Mayor of Cuyahoga Falls, Joseph Harding.  Florek and Glenny rode in a convertible with what was described as a beaming Harding, obviously proud of the Marble Tournament his town had hosted.

Far too many VFW posts are mainly meeting places where veterans can engage in the consumption of alcohol and possibly a game of cards, but VFW Post 4929, founded in 1945, has proven vastly different. “Our post became noted for the fact that we’re serving veterans—which is what the veterans’ VFW post is supposed to do,” according to Commander Joe Jasany. The veterans who attend Post 4929 meetings do so to aid other vets. The goal of every member of the post is to better the lives of their fellow veterans by supporting them and their families (paying for funeral arrangements, a motorized wheelchair, etc.) and veterans hospitals, and performing too many other charitable deeds to mention. ”We played bingo for fifty-one years out at Brecksville VA. We served coffee and doughnuts at Brecksville VA for 41 years every Saturday,” Jasany proudly said.

VFW Post 4929 was started by World War I veterans Leonard Roach and Herbert Richner Sr., who felt there needed to be a place for returning soldiers to visit where they would be able to learn how to readjust to civilian life.

The Ladies Auxiliary of the VFW was formally instituted in 1946 with a membership totaling forty-three. During their existence they played a crucial role in programming for Post 4929. Thousands of hours were spent volunteering at the Brecksville VA Hospital and other facilities benefiting veterans.

Commander Joe was the catalyst in bringing more attention to veterans and in acquiring the old City Hall building as a headquarters in 2000. Prior to its acquisition, the VFW had to meet at a school, a church, or someone’s house for over thirty years. The post hadn’t had a building since the 1960s, when it was located in the Brass Horn, a local watering hole. Losing the Brass Horn as a home base ultimately was a blessing as it was the impetus for altering the focus of the post from alcohol consumption to more altruistic aims.

The membership of Post 4929 increased by twelve after the Cost of Freedom tribute, bringing the total to forty-four members. New members joined from Garfield Heights, Solon, and as far away as Eastlake due to the post’s commitment to its mission: the betterment of veterans’ lives. Most recently, its name has been changed to VFW Post 4929 and Museum, as some of its meeting rooms have been converted to a museum, including a display case dedicated to everything that was left behind from the Cost of Freedom tribute, no matter how trivial the items may seem to the general public.

In 1946, the women of Twinsburg formed the Ladies Auxiliary to VFW 4929.  Since then they have had a long history of serving the community and supporting VFW 4929 in its many charitable activities.  Well run and efficient from its beginning, their history of the first year of the organization foreshadows what it would become.

Twinsburg has always been very proud of it’s Little League Baseball program.  Ran by Franklin Hoon for many years, it has a reputation as one of the best run Little League programs in the area.  During the 1959 season the program was printed compliments of VFW 4929,